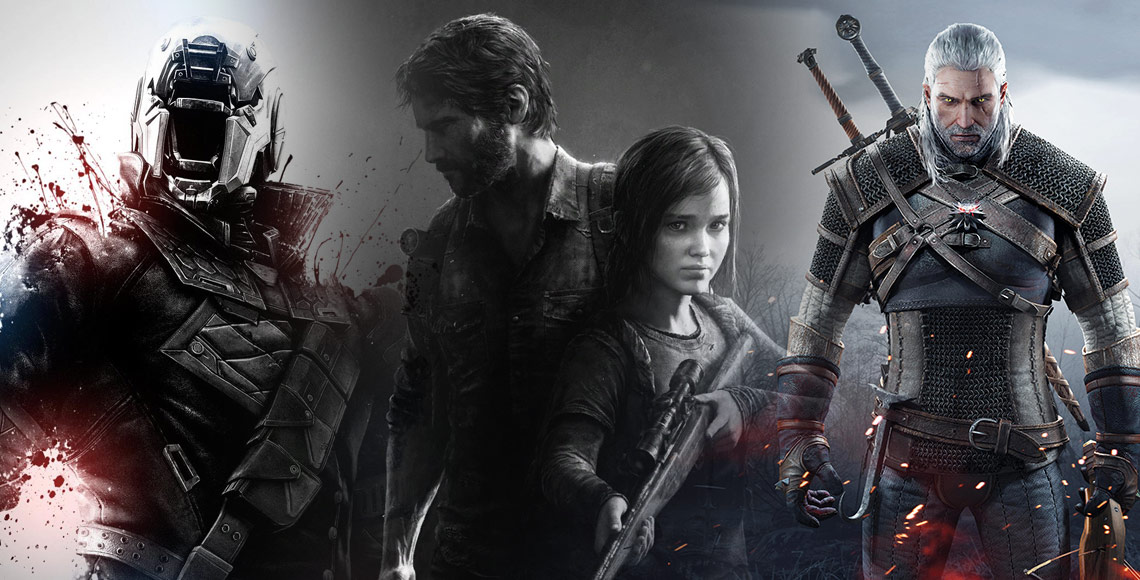 The Delicate Balance of Story and Gameplay

Storytelling dates back to ancient man.  Stories of hunters, of gatherers, of man rising up against all odds to save his people. We have all seen, heard, and read stories just like these all our lives. They have molded us, shaped us, and changed our lives for better and for worse. Stories are integral parts of what makes us human, an outlet for self expression, and video games have changed the way we interact with them.  Before video games, only in our wildest dreams could we physically and emotionally connect with a story and its world.  But video games aren’t just stories and they’re not just video games. One can’t exist without the other. A great story is only as good as the mechanics that make it tick.

So then where do you start with a video game? Story? Gameplay? Can you bring the two together without sacrificing the other? Destiny, The Last of Us and the Witcher 3 are perfect examples of just how important story and gameplay balance can be.

In 2014,  Destiny was hyped up to be the “be all, end all” of video games, and nearly three years after its release, its gameplay remains some of the best in the history of the medium. The running, bashing, gunplay and ultimate abilities featured in the game work so well together, but that unfortunately came with a price. Destiny’s story was a massive disappointment. Plot holes and lack of substantive characters made Destiny’s story very lackluster, even with the addition of Bungie’s most recent DLC. The original story told of you, a guardian, brought back to life to save the galaxy, tasked with fighting back the darkness coming to destroy you and all of humanity. That’s basically it. The story is laughably paper thin and the characters you meet along the way don’t help. Their dialogue is some of the weirdest and most pointless i’ve ever come across. Take the Stranger, for example. She is a female Exo who confronts you after one of many key battles with the Vex. In the midst of her rambling, she says she “[doesn’t] have time to explain why [she doesn’t] have time to explain.” This is one of the worst lines I have ever heard in a video game. There are so many interesting things brought up throughout the course of the game, yet nothing is ever really flushed out or explained to the player by its end. I have never been more confused about what had transpired in a video game than in Destiny. As unfortunate as it was at the time, it did later come to light that there were a few movers and shakers within Activision and Bungie who forced out some of the game’s key people. Turns out those were the same people that gave the game its heart and soul. But that’s a story for another time.

The Last of Us

In 2013, Naughty Dog graced us with one of the most compelling video game stories ever told.   No video game has ever grabbed me by the feels quite like The Last of Us, and right from the get-go at that. The characters of this raw, gritty, post-apocalyptic world felt so real and grounded in their reality. And they were all so relatable! This is one of the most challenging things to do in any video game, and the game’s success in this is most apparent in the dynamics of Joel and Ellie’s relationship. Together they created a bond unlike any I’ve ever seen in a video game. But it’s not just their relationship either. Every scene in the game reveals more and more about the character you play as well as the people that surround them. This exemplary feat is unmatched in video games and allowed me to invest in the game’s characters in the way that I did. Sadly, for me, the gameplay was not great.  After getting about halfway through the game I had to end my journey early. The gameplay was holding back my experience.  It was making it hard for me to traverse the world (as linear as it was) and advance from one encounter to the next. That said, I did play the game some time after it released. Its mechanics felt so dated to me. Had I played The Last of Us at the time of its original release, however, I know I would have eaten it up. I also feel like I was overly hyped for the game. I was expecting it to be the “best of the best” in terms of  story and gameplay and what I got wasn’t all what I anticipated. Although I have my gripes with The Last of Us, I would still recommend everyone play this game just to experience its story.

The Witcher 3, on the other hand, nails both story and gameplay and has become one of my favorite games of all time. It really feels like CD Projekt Red took the time to develop the game’s story alongside its gameplay. The Witcher 3’s story moved me on all fronts and the gameplay only added to the world I was invested in. As the game’s titular character, Geralt, you get to experience the people, monsters and, most of all, political landscape the game has to offer. The politics run deep in the world of the Witcher.  You can find people of all kinds, prejudiced and racist as some are, discussing the war at large as you saunter around the streets of Novigrad. You hear stories of creatures on the countryside attacking villagers, only to find and defeat said creatures for rewards big and small. Every minute within the Witcher’s world reveals something new, and the more you play, the more you begin to understand how rich the story of The Witcher 3 truly is. With its deep well of lore, it is easy to see that the Witcher 3 was set for success not only as the book it first was but also as the video game it became. Yes, its story was written and fully developed before its game but it is still a prime example of what should happen for all video games that are story driven, even those that strive to be. Just like movies, video games should take the time to flesh out their main ideas and characters with rewrites and reviews. I feel most video games, especially AAA titles, only go so far, eventually leading to the game’s downfall. Just look at Destiny. The Witcher 3 fully fleshed out every single crack and crevice of its universe, painting every little thing in it with the smallest detail. It was set for success from the get go and more studios should use this game as their bible for creation.

We come to games to cry, love and have fun, and we can’t get that through story or gameplay alone.

These three games are key examples, at least for me, of the balance or lack there of in video games. Games have become such integral parts of our lives as gamers and they deserve to be as complete as they can be. After all, we come to games to cry, love and have fun, and we can’t get that through story or gameplay alone. This medium is rife with opportunity and it’s wonderful seeing it mature every day. The future is very bright for video games, and we will continue to get closer and closer to the perfect balance with each new title. Will we ever find that perfect balance? I don’t know. But I do know that the video games that do will go down in history as some of the greatest of all time.