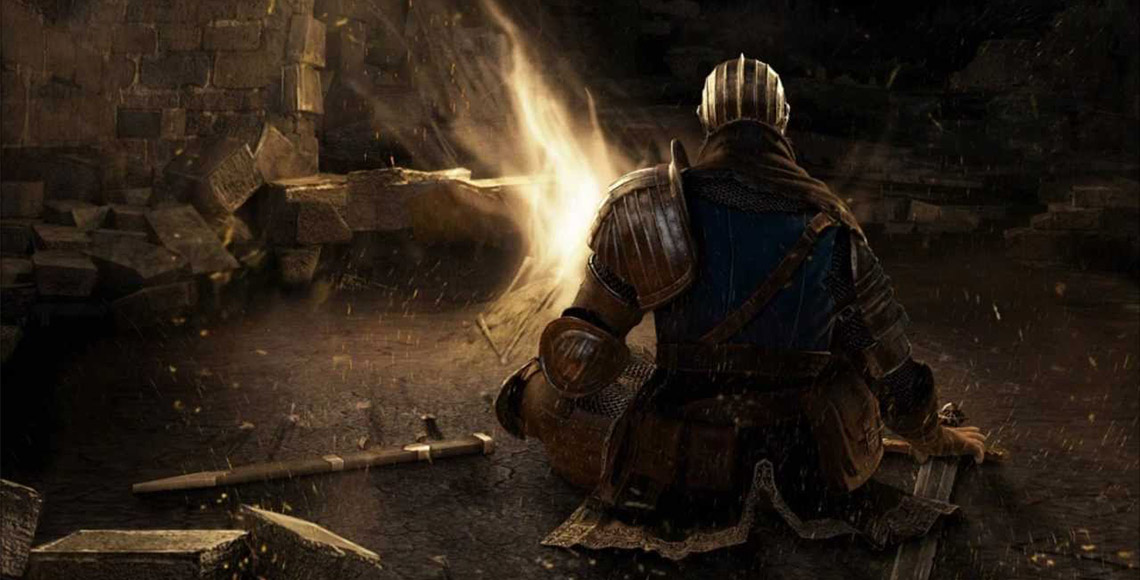 My Journey as the Chosen Undead

Difficulty in video games has always been appealing to me. I find myself drawn to the challenge of beating a game on its hardest difficulty or unlocking its incredibly secret, game-breaking super weapon. So when a friend of mine told me I HAD to play Dark Souls, I knew I couldn’t deny him. I was the guy who bested both Ninja Gaiden and God of War on their hardest difficulties.  I had a reputation to uphold. After all, how bad could it be?

Now I had heard about Dark Souls, but I was always a bit wary. The game itself had very little marketing, save for some spread via word of mouth. When the game was released, so began the fabled stories. Horrific accounts of gamers breaking their controllers, burning their discs, and throwing their consoles off balconies. There were few who could best it and those who did recount the moment as something akin to a greek tragedy.  Just listening to them made it sound as if I was going to have to crawl all the way to Mount Doom on broken glass just to try.  But could I do it? Could I stand in the shadow of this fabled title and emerge victorious?  Who would win in this contest? Me…or Dark Souls?

Who would win in this contest? Me…or Dark Souls?

So there I was, on my birthday, (no I will not tell you which one) and my very good friend brings me a used copy of Dark Souls on the PS3.  He knocks on my door, thrusts the game into my chest, and proclaims, “I’ll tell you one thing and one thing only: Blighttown sucks and do NOT look at a strategy guide. It and the game are in cahoots.” Then, like the Ghost of Gamer’s past, he was gone.  The moment had come.  I settled into my couch, installed, and started on my journey, one that would soon consume my time, energy, and make me flash white with rage.  I would also love every moment of it. Now I have to stop here and let you know I won’t be walking you through each and every minute of my experience through this brutal yet rewarding masterpiece. I want you to experience it for yourself, but it is also because the more that I rant about it, the more I begin to sound like that guy who wears tinfoil hats and has newspaper clippings taped to his wall. What I will give you, however, is a summation of said experience.

Difficulty aside, Dark Souls delivered something to me that no other game had ever done in my gaming life. I was forever changed from the experience and herald its brilliance whenever I am able. It all started when my character, dropped into a dark and unforgiving world, was instructed to “ring two bells: one above and one below” by a solitary NPC.

That was it. That  was all of this quest that I was given. I was given minimal direction and even less exposition then thrust into the fray.  Now, by gamer’s standards, this may seem like poor game design or cruel and rightfully so. Most gamers over a certain age have come to expect the same recycled formulas after decades of seeing them over and over. However, From Software knowingly threw that formula away in favor of something new.  I didn’t have to sit through a tutorial. I didn’t have to trudge through an unskippable cutscene or 15 minutes of dialogue with an overwhelming number of names, family histories, and reasons why the big bad evil guy is big, bad, and evil. Instead, I watched a cryptic and puzzling cutscene, learned a few mechanics (through clumsy trial and error), then fought my very first boss.  I’d be lying if I said I almost walked away from the colossal ass kicking I took after my first dozen attempts.  Despite my major frustrations, I pressed on. I feel it necessary here to explain a few things.  While I do enjoy a good handheld journey through a game, years of it had, unfortunately, conditioned me to expect, well, my hand to be held. It was always “Go save this character from this!” or “Here use this amazing new item/weapon that will make the game SUPER easy now.”  I had never been given the freedom to make my own mistakes. These mistakes forced me to flex some gaming muscles I hadn’t flexed in years.  The practice of observation, adaptation, and investigation.  Death after death taught me how to better time a weapon swing or execute parries and ripostes. Invasions by other players almost brought me to the brink of insanity but helped solidify my training.  Yet, it wasn’t until I began investigating and exploring the game’s people, places and things that the game took on a whole new life.  The countless screens of “You Died” almost broke me, but I kept on going back just so I could find out more.  I needed to know the why. The game would reward your struggles with not just souls (in game XP and currency), but also with a deep well of lore.  At face value, Dark Souls appears to be nothing more than a difficult game disguised as a hack and slash.  In reality, the rich depth and conflicting tragedy of it all draws you in to pursue your endgame.

These mistakes forced me to flex some gaming muscles I hadn’t flexed in years.

For me, this was the most beautiful aspect of Dark Souls.  I wasn’t just experiencing a story in an RPG, I WAS the story, and I was telling it on my own terms. I turned the page and I only did so when I felt I was adequately prepared.  I had to interpret the half truths delivered by the NPCs, draw conclusions from events that were whispered legend, and do this through circumstantial evidence.  NOTHING was certain in the world of Dark Souls.

I died so many times I stopped counting after the second boss, but by then it wasn’t about that anymore. The deaths in the game were nothing more than lessons learned. I wasn’t playing anymore because it was “hard” but because I was weaving a tale of revenge and embarking on a quest to destroy gods themselves.

I highly suggest that everyone give this game a chance.  It is truly unique and has set a standard that all games in my future will be held to.  Every so often I dust it off and traverse Lordran once again just to tell my story.  Every single friend of mine who was brave enough to have played it wrote a different story. There are several heavily debated moments in the game that range from character choices, morality, death vs. life, and even religion, yet we all interpreted the game in wildly different ways. Some beautiful, some tragic.

In all this wonderment and tribulation, we all could agree on one thing: