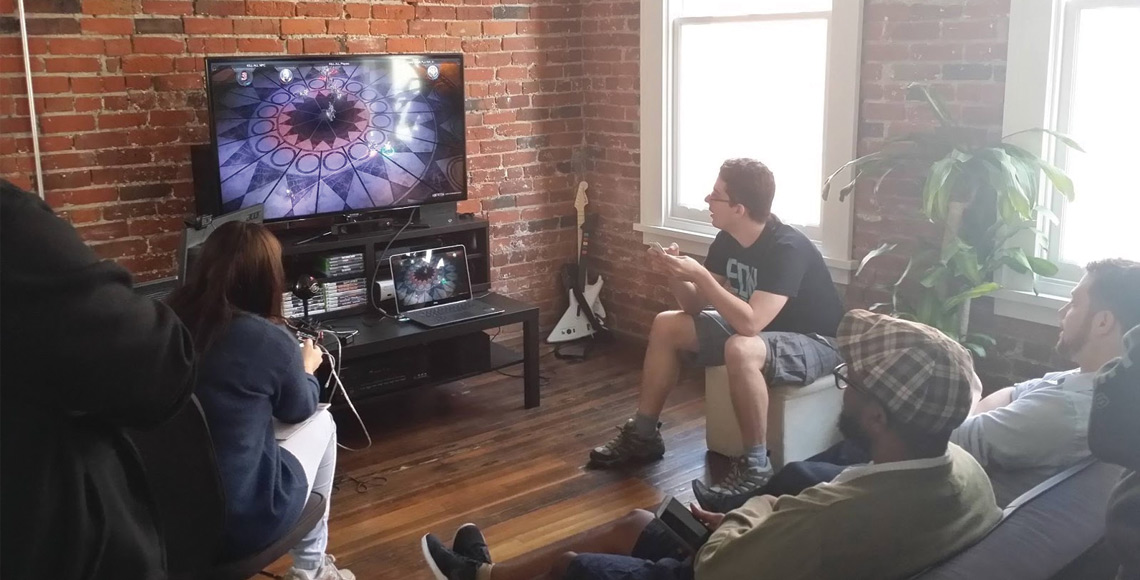 The Missed Potential of the Second Screen

You know that phone in your pocket? The one you always carry with you? It’s being underutilized. People and smartphones are nearly inseparable yet video game developers have yet to unlock the full potential of this “second screen.” Removing busy user interfaces, preparing for game sessions away from home, even choosing your next move in a game of wits are all possible with a second screen. There’s one in everyone’s pocket already, right? Why not take advantage of it?

When we play games, the menus we use can get busy fast. Managing abilities, upgrades, inventories and quests gets very complicated. With a second screen, you could essentially replace in-game menus in favor of much more interactive menus on your phone. Rather than pressing the left and right bumpers to navigate through slews of menus, all you’d have to do is tap on where you want to go. Drag and drop items, organize your quests, and tap to make particular objectives active on your map. These time-saving actions would allow players to actually play the game as opposed to navigating through endless menus.

In-game maps have always been tedious to navigate, but what if those maps could live next to you on the couch? Users could link their smartphones to a particular game and see their character moving on the map without having to disrupt their game. Battlefield 4 pulled this off very well with its companion app. You could use it to navigate your map, pinpoint your location, edit your loadouts and even command the battlefield, all while away from your computer or console. Doing something like this would allow us players to focus on our game and achieve our desired goals much faster.

Prepare On the Go

Another large market game that utilizes a second screen well is Destiny. When you plan on raiding with your friends for two or three hours, you don’t really have time to look over your stats. With Destiny’s companion app, you can quickly review your stats, bounties, gear and progression all on your phone and away from home. This makes it much easier to go home after a long day at work and jump right into the action. Modern consoles have similar companion apps that bring second screen experiences to console ecosystems. With Xbox SmartGlass and the Playstation companion app, you can manage your console on the go. It’s not uncommon for a player to purchase and download a game to his/her PS4 while sitting at work. Rather than making a “note” of your friend’s gamertag, simply add them on PSN or Live by pulling out your “second screen.” These kinds of features have allowed consoles to become more than just a stationery box but, rather, a part of your lifestyle.

It’s not uncommon for a player to purchase and download a game to his/her PS4 while sitting at work.

As I mentioned earlier, EA released a companion app for Battlefield 4 that allowed you to see your map amongst other things. Furthermore, it allowed you to play as the “commander” of an army from your iPad when you couldn’t play the full game at home. Being able to command a team to victory on the train ride to work is pretty incredible. Although the feature may not have lasted, its ideas had lots of potential. Watch Dogs tried something similar with a ctOS map app that allowed you to interfere with existing players’ games. These experiences were short-lived as well, but if developers made applications like this integral parts of their games, success wouldn’t seem so far away.

The Enhancement of Story Experiences

Although apps like those in Battlefield 4 and Watch Dogs didn’t last long, the ideas they introduced could still be expanded on in a worthwhile way. Take Eon Altar, for example. In this game, players work side by side to progress through the game’s story and combat engagements. At certain moments, players must use their phones to make singular dialogue decisions, ones that affect not only the party but the direction of the story as well. This information is kept private until made public to the group, and it is through this second screen experience that players begin to feel the overall impact they have on the game being played. Story can be developed even further with a second screen. Destiny tried this approach with the introduction of their lore-filled Grimoire cards but failed to include any real story outside of the cards themselves. However, games like Mass Effect could remove their lore language (in this case, the Codex) from their core game and onto a phone where scanning through information becomes much easier. You could also introduce action-based story nuggets to the second screen concept. Imagine triggering a mission brief in-game only to have your AI partner call you on your actual phone with the information. This level of interaction with chat logs and email would make any immersive feelings ever more present.  Now if only we could have conversations with AI themselves…

Imagine triggering a mission brief in-game only to have your AI partner call you on your actual phone with the information.

The Future of the Second Screen

The second screen concept has a very bright future. Although the experiences currently available to gamers only enhance certain aspects of gameplay, there is lots of room to grow in the realm of true in-game integration. The primary goal of a second screen should, however, be to make things more convenient, and exploring applications outside of companion apps will take lots of careful consideration. After all, our phones are extremely powerful mini computers, so it only makes sense to use them to their fullest potential; to unlock the next level of gaming.