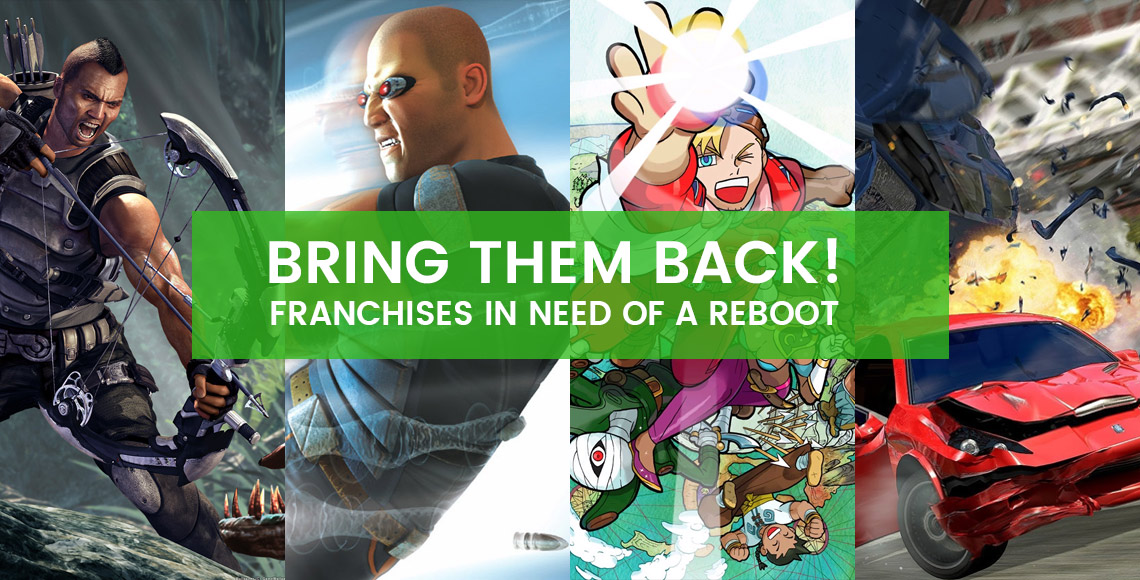 Bring Them Back! Franchises In Need of a Reboot

2016 took us all on a very long, very welcome trip down memory lane and 2017 is doing much of the same.  Franchises like Crash Bandicoot and Parappa the Rapper are back and better than ever and a slew of other classic revivals are on the horizon. But there are still a few franchises out there that are showing no signs of coming back. I’ve compiled a list of a select few of those dormant franchises below, particularly ones that have made a significant impact in my life. Note that this list excludes any games that have been rebooted, are being rebooted, or are similar enough to titles that have been developed or are currently being developed. Examples include Quake, Banjo Kazooie, Silent Hill, Onimusha, etc.

I owe my infatuation with video games to Turok: Dinosaur Hunter.  Puzzles and platforming, strategy and survival, aiming, shooting, strafing and exploring, Turok was the perfect introduction to the world of 3D video games. It was the most realistic render I had ever seen set in a world so wanted by a child of my age.  Dinosaurs, bows and arrows, monkeys and deer placed ingeniously across prehistoric jungle; it was a dream come true.  Playing it? Even more unbelievable. Turok pioneered a freedom, depth and polish in video games I previously thought impossible, and it has become my benchmark for video game excellence ever since.  Despite all of that, however, it was the lessons Turok: Dinosaur Hunter taught me that have made it so influential to me as a gamer: Patience is a virtue, there’s never enough ammo, and spiders are fucking terrible.  There isn’t a game like it now and, at this rate, there may never be, but Turok and its beloved sequels deserve the best next-gen treatment there is.

Two words: NINJA MONKEYS. TimeSplitters took the tried and true concepts of Goldeneye and Perfect Dark and injected them with a silly, welcome humor for the ages. You’d be hard pressed to find another game that lets you snipe an Elvis impersonator as the Gingerbread Man. This time-bending shooter series hasn’t seen the light of day since 2005’s Future Perfect, but its memories still linger to this day. I still remember playing Harry Tipper against an army of monkeys in the frozen wasteland of Siberia. And who could forget playing Virus on Subway and wiping out entire swathes of infected with the flip of switch. TimeSplitters was the perfect couch multiplayer shooter, and in an age of quirky games, online play, and masterful reboots, Cortez and his time-splitting pals are begging to be brought back onto the scene. Make monkey sniping great again.

When people think of the Dreamcast, most will think of Sonic Adventure, Jet Set Radio and the excellent SoulCaliber. But when I think of the Dreamcast? I think of Power Stone, one of the greatest fighting games to ever grace the genre. This 1999 title featured a diverse cast of characters pit against one another in arena-style, isometric battles. You could jump, punch, kick and dodge, pick up chairs and smash them on your enemies, all the while set in a variety of gorgeous and worldly arenas. But there was nothing quite like transforming into a deadly force of reckoning after collecting that elusive third power stone. The number of times I screamed “that’s cheating” after falling at the hands of a hulking Gunrock is unprecedented. To this day, Power Stone remains in a league of its own, an echelon rivaling, dare I say, the Smash Bros, and its non-existence in today’s gaming world is miserable. The ball is in your court, Capcom. Bring Gunrock back.

Fall Out Boy, Jimmy Eat World, Rise Against, New Found Glory, Motion City Soundtrack, Yellowcard, The Ramones, My Chemical Romance. A list of some of my favorite bands or a list of artists on a soundtrack? Yeah…it’s both. Burnout 3: Takedown remains my favorite PlayStation 2 game of all time (sorry Kingdom Hearts) and it isn’t just because of its stellar soundtrack. It’s maddeningly addictive, stunningly gorgeous and, above all, crazy inventive. Burnout 3 took everything we knew about racing games and turned it completely upside down. Linear story? Gone. Checkpoints? Not anymore. Traffic? Well, let’s go against it. And the crashing? Incredible. I’ve yet to experience video game crashes as polished and meaningful as they were in Burnout 3. The post-crash Aftertouch is still one of the most ingenious in-game mechanics ever created. With online gaming as prominent as it is, it is almost criminal for Burnout to be just a “Memory”. Let’s get back, back, back to the disaster, everyone. My heart’s already beating faster.