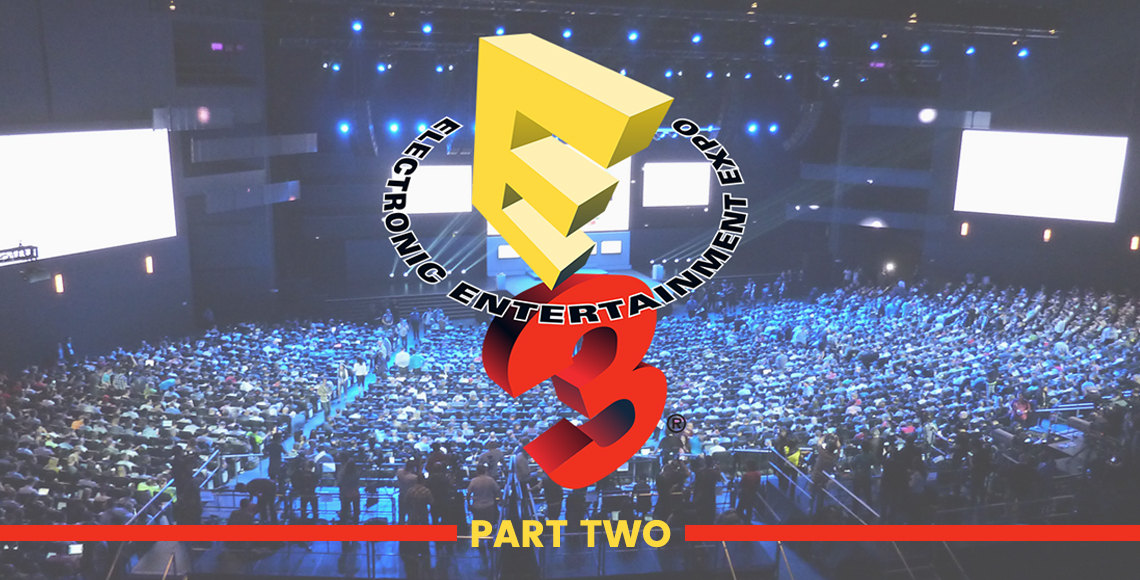 E3’s developer conferences have all come and gone and the show floor is now open for business. I’ve had a bit of time to sit on the announcements of the last few days and am collectively both surprised and disappointed. I went into this year expecting a lot from certain folks and less from others but have found those realities to be completely flipped. Overall, this year’s conferences were “OK.” These are my thoughts.

Not much to shout about with EA. Star Wars Battlefront II looked solid as did Need for Speed. Their sports titles weren’t anything incredible, either. The new title from the minds behind Brothers: A Tale of Two Sons seems interesting, albeit shallow. However EA’s newest IP, Anthem, was breathtaking. Bioware’s Anthem seems to be mixing the best parts of Destiny and Horizon Zero Dawn into one massive, co-op adventure. Mech suits seem to be all the rage as of late and Anthem is no stranger to the trend. Your javelin, as they call it, is fully customizable and can take you to the skies and across the ground with ease. I’ve learned to take Bioware reveals with a grain of salt, however. I will believe this game when I see it with my own eyes.

It’s unfortunate that a conference that absolutely had to deliver didn’t. In its defense, none of the developer conferences really wowed anybody (except Nintendo’s, which we will get to here in a second), but Microsoft really needed the Xbox One X, formerly of Scorpio fame, to grab its audience. The console is gorgeous, its specs are great, but the overall gaming community, including myself, still doesn’t see why they’d opt for an X versus a PC or a PS4. At least the PS4 Pro sits at a cool $399.99, soon to be $349.99, but at $499.99 a console doesn’t really seem worth it. The lackluster first-party games announced don’t do Microsoft’s newest console any favors (Crackdown 3 and State of Decay 2) either. But even so, Microsoft continues to do things that benefit gamers. Original Xbox backwards compatibility is an amazing accomplishment and the announcement of more cross-play titles is extremely welcome. Overall, Microsoft did not deliver, but that doesn’t mean gamers aren’t better off because of it.  Microsoft will find its way. Wolfenstein II. That’s all you really need to know. Well, we kind of already knew, but still. This game looks INSANE. Single-player shooters aren’t extremely common anymore but the Wolfenstein series has yet to disappoint. The New Order and The Old Blood were fantastic and The New Colossus looks even better. The Evil Within 2 was also officially revealed and VR adaptations of Fallout, Doom and Skyrim made their rounds. Bethesda’s conference has never really been one to “Wow” and that’s true even here, but I got what I was expecting and I’m okay with that.

Assassin’s Creed, Far Cry 5, and The Crew 2. They look just about what you’d expect them to look like. Egypt looks cool, but it’s otherwise more of the same. Montana is neat but nothing I haven’t seen before.  The Crew 2 looks like Steep but without all the snow. That said, The Fractured But Whole continues to make me laugh and the newly revealed South Park mobile game is a day one purchase for me. The biggest (and really the only) surprise from the conference, however, was the reveal of Beyond Good and Evil 2, a crowd-favorite. Not much in the way of gameplay was shown but the acknowledgement of its existence was well received. There were a couple of new VR and Switch titles revealed as well, but nothing to shout about. Secretly, though…I’m most excited for Mario + Rabbids. Seriously. I can’t wait.

Sony’s conference was unbelievably solid, continuing the trend they started last year. That is, if you’re okay with seeing more of the same. Playstation announced no new first-party titles outside of some stellar-looking PSVR experiences and Monster Hunter Worlds and that took many fans by surprise. The content they did provide, however, was excellent. Sony brought out more gameplay and footage for Uncharted: The Lost Legacy, God of War, Days Gone, and Detroit: Become Human as well as a trailer for the upcoming Horizon Zero Dawn DLC. But the real star of the show was the upcoming Spiderman game.  Sony treated the world to a gameplay cinematic of the PS4-exclusive and it was absolutely riveting. My wildest dreams could not have fathomed a Spiderman game that looks and plays like this one. Any other year I’d give this game my Game of the Show, but this year, Nintendo has something to say about that. ARE YOU KIDDING ME? WOW! Nintendo’s E3 conference was hands down the best show of the year.  Pokemon, Kirby, AND Yoshi are making their way on the Nintendo Switch AND the wildly popular Rocket League will be following suit this holiday season. Xenoblade Chronicles 2 showed some stellar new footage to go along with its Holiday release window.  A Metroid II remake is coming to the 3DS soon and, I still can’t believe this one, Metroid Prime 4 is officially being developed for the Nintendo Switch! And that’s not all. The Breath of the Wild had its DLC showcased and dated and Mario + Rabbids got shown off a bit more. But it was Super Mario Odyssey that absolutely stole the show for me. It’s exactly what I’d hoped for from this mainline Mario game: a return to the days of 64 and Sunshine. The jazzy new trailer for Nintendo’s newest juggernaut wowed with its show of unique gameplay mechanics and stellar worlds. This game is a system seller (as if Zelda wasn’t enough), and I can’t wait to play come October. This is Part 2 of a three part series set across the various stages of the E3 conference. Part 1 is on my expectations going into developer conferences. Part 2 is on my reactions to announcements made during them. Part 3 will focus on my experiences on the show floor itself. Experience the show with me right here at TheInnerGamer.net.