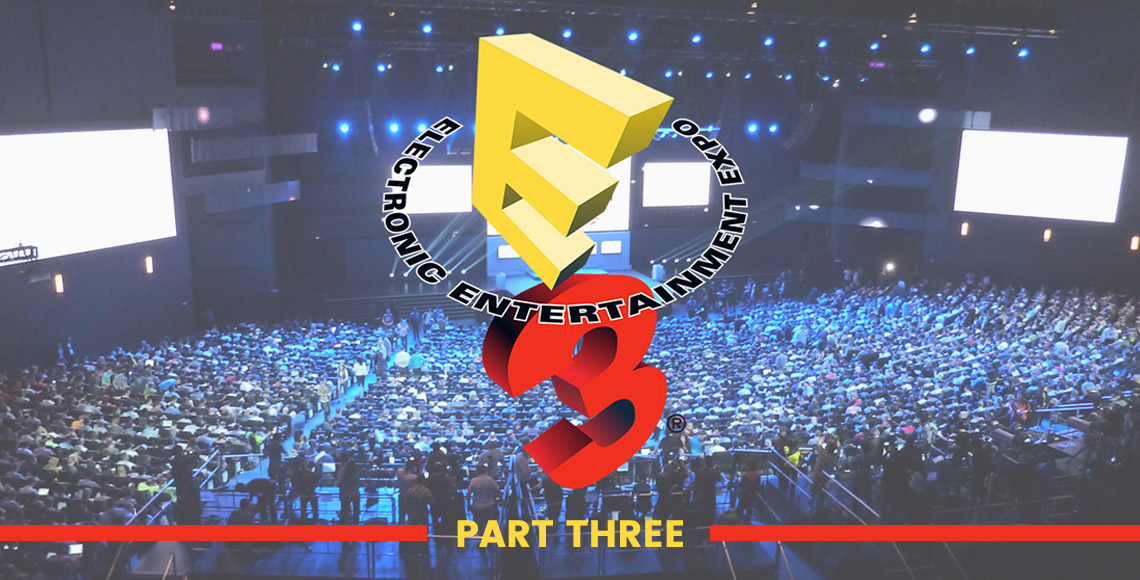 I’m headed to the airport now. Billboards whizzing by, nerdy reminders of what brought me to Los Angeles. The promise of huge games, bright lights and awesome tech. I’m nearly 24 hours removed from my E3 experience and you know what? I can confidently say that it wasn’t great. No, this doesn’t mean I hated it or that it was all for naught, but what it does mean is that, holistically, it didn’t sit right with me. Believe me, I wish that weren’t the case. Last year’s conference was an absolute blast and I had high hopes that I’d find myself feeling the same this year. Not this time. Not even close.

Maybe it had something to do with the games that were playable on the floor. Maybe they weren’t all that great. Super Mario Odyssey, Destiny 2, Star Wars Battlefront II, Far Cry 5…no, that wasn’t it. Maybe it was the spectacle of it all. Maybe it wasn’t as grand as I’d remembered. Life-sized dragons, smoky castles, massive screens and lights. No, that definitely wasn’t it. Maybe it was the giveaways. Maybe there weren’t enough. Maybe they weren’t cool enough. My Super Mario Odyssey hat, for example, isn’t all that great. It has massive cartoon eyes on it. It’s bright, bright red and is one of only a handful in existence…yeah, that’s definitely not it (I say as I wear it on my massive head).

So then what the hell was it!? I did everything that I did last year! I saw massive displays, got cool stuff, met famous people, played a bunch of games…wait. What did I play? Well I played Super Mario Odyssey and that was fantastic. I played Far Cry 5. Not for me, but still cool to try out. I played…well, that’s it. Six hours of waiting in line…and I only played TWO games. Last year I played Horizon Zero Dawn, The Legend of Zelda, Final Fantasy XV, Battlefield 1, Edge of Nowhere, Night in the Woods, Gravity Rush 2, Monster Hunter Generations, I Am Setsuna, Kingdom Hearts 2.8, Watch Dogs 2, ReCore, and Cuphead. And that doesn’t include a handful of other stellar indies I got my hands on.

How the hell can a conference focused on celebrating and enjoying playing video games allow for such a large step back in the ability to fulfill that? Yes, 15,000 more people were allowed onto the show floor. I’m not against allowing more people the chance to experience something like E3. But 15,000 more people isn’t exactly the type of thing you put to the wayside. Crowded halls, impossibly long lines, understaffing, how can a conference expecting 70,000 people, roughly 20,000 more than previous years, not consider these things?  Even with the company of two of my great friends it became so increasingly frustrating to be on that show floor. It’s a damn shame. I’m pulling up to the airport now, livid, obviously, but appreciative of the bright sides of the conference nonetheless.  All of the new games, all of the cool tech, it is all right around the corner. With that to look forward to, maybe complaining isn’t so worth it. But then again, I’m not doing it just for me. Here’s to hoping that this is a new jumping off point for an E3 that celebrates games with the masses in a way that I was able last year. Until then, I’ll keep waiting for Kingdom Hearts 3.

This is Part 3 of a three part series set across the various stages of the E3 conference. Part 1 is on my expectations going into developer conferences. Part 2 is on my reactions to announcements made during them. Part 3 focuses on my experiences on the show floor itself. Experience the show with me right here at TheInnerGamer.net.